5 things information officers and octopuses have in common

5 things information officers and octopuses have in common

The octopus has become something of a theme here at Novation since we put one on the cover of our new POPIA book. This got us thinking about how information officers (IOs) and octopuses have more in common than you might imagine. Here are the top 5 ways IOs and octopuses are alike.

1. THEY CAN (KIND OF) SEE INTO THE FUTURE

Remember the German octopus named Paul who correctly predicted the outcome of eight matches in the 2010 FIFA World Cup? Paul the Octopus is sadly no longer with us, but his legacy lives on. Similarly, IOs have to be able to plan for the likelihood of a variety of scenarios occurring in the future. This is essentially Risk Management 101. Understanding risk management is very important for IOs seeking to manage their organisation’s POPIA compliance risks.

2. THEY ARE SHAPE-SHIFTERS, MULTITASKERS AND WEARERS OF MANY HATS

Octopuses can change colour instantaneously to camouflage with their surroundings, and shape-shift to fit into the tiniest cracks and crevices in a reef. The actual day job of most IOs (and deputy IOs, or DIOs) is as CEO, MD, CIO, legal counsel, company secretary, compliance officer, internal auditor, head of IT, IT manager… The list goes on. And they may feel they are expected to become POPIA experts overnight! Many smaller organisations won’t have the traditional three lines of defence to manage POPIA compliance risks, either. This means that many IOs and DIOs are owning and managing POPIA risks, reviewing and advising on how to manage these risks, and essentially marking their own homework. It’s a lot.

Did you know that both male and female octopuses die soon after the female has laid their eggs? While no IOs and DIOs (that we know of) have actually kicked the bucket after giving birth to a POPIA project, chances are very high that they feel like death afterwards! We suggest being very nice to your IO. Speak in soothing tones. Offer them a hug. The countdown to 1 July 2021 was very stressful.

4. THEY HAVE A GREAT ABILITY TO MAKE A COMEBACK

An octopus can regenerate lost limbs if, for example, they are bitten off. As soon as an octopus’s arm is damaged or lost, a regrowth process kicks in to make the limb whole again. Four months later, it has a new, fully functioning arm. The IOs and DIOs left standing after 2020/2021 have shown resilience and the ability to innovate, adapt and change to effectively manage the grenades thrown at them over the past two years. Remember, taking data privacy seriously can also be a business opportunity and innovation incubator. Organisations need to work with their IOs and DIOs to use the increased focus on data privacy as an opportunity to grow, innovate, improve and adapt to business risks.

5. THEY HAVE A SENSE OF HUMOUR

Did you know that (another!) German octopus, this one called Otto, figured out that if he squirted water at a spotlight above his tank he could short-circuit his aquarium’s entire electricity system? He used to do this night after night, and enjoy watching the humans scramble to figure out what had happened. Only after several determined employees spent the night at the aquarium to discover the answer to the mysterious electricity outages was Otto the Octopus caught! IOs and DIOs are people, too, so please humour them when they try to infuse a little laughter or (bad) compliance jokes into their POPIA training. Science tells us that humour helps the brain to process and remember complex things, which is why we injected some decent (and indecent) POPIA jokes into our book. 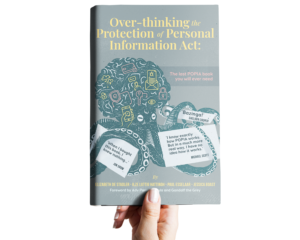 About the Author: Jessica Boast